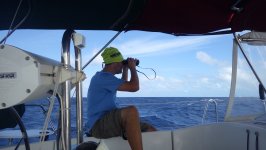 Sailing across the Gulf Stream

Left Cape Florida around 3AM, to arrive at Bimini, Bahamas around noon. Interesting experience to sail at night. Weather was great for a delightful sailing most of the passage.

Tried catching fish along the way - no luck, again. 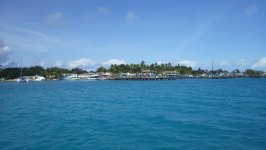 Arrived at Bimini Islands around noon.
Docked and stayed overnight at one of the marinas, cleared Customs and Immigration.

Walked around Alice town, browsed street shops, got some local food and beer to celebrate the arrival to Bahamas. 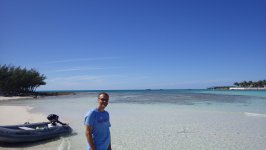 Decided to explore nearby cays - left Bimini and sailed south toward Gun and Cat Cays.

First, tried anchoring west of Gun Cay, near Honeymoon Harbour. Could not set the anchor properly - the bottom is rocky, and the anchor would not dig in. Tried picking a sandy spot 3 times, every time diving to check if anchor was set - no success. Since wind shift was expected, decided to try another anchorage for the better night sleep.
So motored to the nearby West side of the North Cat Cay. The anchor set well (again, dived to confirm), however the westerly swell from the Straits of Florida perpendicular to the northerly winds created a very uncomfortable rolling - I think it was the worse night we had so far during our voyage.

In the morning, moved again to somewhat better location south of the North Cat Cay.
Spent several days there. There always seem to be western swell, rolling the boat, so few nights were uncomfortable.

North Cat Cay is a privately own community, with its marina and airstrip for small airplanes. They must have some small farm as well - we could hear roosters calling often.

Went on beach on South Cat Cay, spend here 3 days. No one around except us...
Larysa found her new hobby - collecting shells, I relaxed, explored the island, did some reading, planned for upcoming passages.

We have found several conches, enough for a nice seafood meal. Although it's a lot of work to prepare.

And, we had pets during our stay here - two small sharks (remoras) found home under our boat. We called them Lucy and Roxy, same as out cats back home in Canada. They loved our food drops. 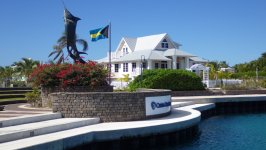 Sailed from Cat Cays to Chub Cay, with an overnight anchoring on the Great Bahama Bank. It is an unusual experience, anchoring in the middle of the sea with no land in sight.

Chub Cay is a convenient stop for traveling further East. Mostly a private island. Spend few days here - visiting local resort/marina, exploring nearby islands, picking up fresh groceries from the local store and topping-up water tanks before moving on. Met other cruisers from Ontario, on a similar route to Exumas. 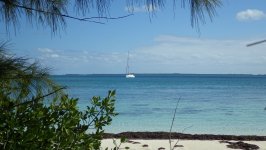 For the next few days, weather forecasts predicted strong westerly winds, so decided to check out another nearby spot with more wind protection from that direction - Fraser’s Hog Cay.
The Cay is a quite secluded spot - we anchored across a small inviting beach.

We spent first day walking around the beach, small stroll around the island, snorkeling and collected some conch for the dinner. The evening weather was perfect, including a nice sunset on the quiet clear water.

The next day we had a campfire picnic on the beach. What a wonderful day it was! 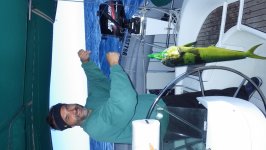 The next day was my lucky fishing day - caught a mahi during our brisk sailing passage!

On our way to Exumas, we needed to stop overnight around the Nassau, New Providence Island area.
For various reasons, decided not to go into the Nassau harbour and venture out to city - so we anchored a little to the East, in the West Bottom Harbour near Rose Island. Had 8 boats anchored with us, many Canadians.